The Green Governor of New Jersey 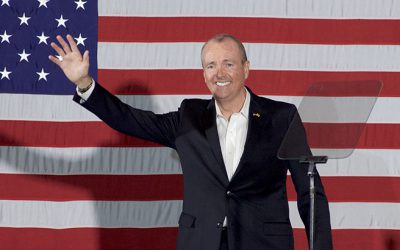 Phil Murphy won Tuesday’s Gubernatorial election as expected – but the biggest winners prove to be renewable energy homeowners, consumers, jobseekers and businesses. While historically, New Jersey has ranked highest for its pro-solar policies and various incentives, in the past few years there has been a decline in the growth of solar, and a crash in the price of Solar Renewable Energy Credits (SRECs). Murphy’s win assures a brighter future ahead for solar energy in New Jersey. This is why solar advocates, homeowners and entrepreneurs are excited:

1. Murphy has pledged to raise the renewable portfolio standard (RPS) for utilities right away

During Christie’s term as governor, his energy policy focused almost exclusively on traditional fossil fuel as sources of power – meaning government subsidies and incentives largely supported building natural gas infrastructure, and keeping prices down for natural gas; often at the expense of wind or solar power. That meant an expansion of natural gas infrastructure, and a slowdown on investment in solar and wind energy in New Jersey. In sharp contrast, Murphy plans to raise the minimum amount of electricity purchased by the utility companies from renewable sources. This will lead to an increased demand for solar energy generated from homeowners - raising the price of SRECs. For solar-savvy producers and consumers, they already know that a higher SREC price means higher income for homeowners via net-metering. This allows for a quicker payback period on solar panel systems and a higher return-on-investment over the life of the panels (which are typically insured for 25 years).

The governor-elect plans to set a deadline of 2050 for the state of New Jersey to source all of its energy from renewable sources; a game changer for everyone, even those outside of New Jersey. The deadline coincides with scientific findings that predict a 3.6 degree Fahrenheit global rise in temperature will happen by 2050, after which climate change will get dangerous. This shift in policy offers residents a sense of security, and knowledge that supporting solar and renewable energy is a priority for the NJ government.
But it’s not just environmental activists who can cheer for this bold move by Murphy. This clearly gives renewable energy providers the opening they have been looking for to expand in New Jersey – if not the whole region – which means more new businesses, more new jobs, more competition, and opportunities to help diversify New Jersey’s economy as well as its energy supply.nt.

3. Plans To Strengthen The Grid

Power outages during the likes of Sandy in 2012 and Hurricane Irene in 2011 were crippling for homeowners and businesses alike, but Governor elect Murphy plans to safeguard New Jersey residents from future power outages by prioritizing investment in resilient electric grid infrastructure. He’s’d doing that by mandating the creation of 600 megawatts of energy storage by 2021 ; enough to power some 390,000 homes ; and 2,000 megawatts of storage to be deployed by 2030, which would be enough to power 1.3 million New Jersey homes.
Aside from this making storage units more in-demand and potentially cheaper, with renewables being the driving source of power, more homeowners, businesses and public entities can weather a storm (pun intended) without losing power. Additionally, a localized, diverse, renewable power source means a decrease in loss of power through transmission and loss of tax dollars to repair an ageing grid – critical since NJ taxpayers are likely to bear the full costs, given President Trump’s priority for improving national infrastructure seems to have stalled for at least this next fiscal year. Overall, New Jersey residents who rely on renewables or not can all expect faster restoration times and fewer rolling blackouts during peak energy use periods.

4. The First Step Towards Solving a Problem Is Admitting You Have One!

Murphy knows this and openly acknowledges that humans are causing climate change. We all want our elected officials to be conscientious, transparent and honest. But this open declaration coupled with the boldness of the 2050 clean energy pledge indicates a desire to be forward-thinking when it comes to renewables. This is something that few states in America have done; resulting in conceding our renewable energy growth, and a shift of entrepreneurial opportunities to foreign markets, businesses and investors.
Given that Christie disbanded the office of climate change within the State Department of Environmental Protection in 2010; and in 2015, dismissed scientists’ warnings that climate change is an existential crisis for humanity’s survival; we can expect a pretty big contrast between Christie’s and Murphy’s administrations. Murphy already said he would “reinstate the office of climate change,” to “ensure that impartial, fact-based scientific principles” guide state policy.

5. Rejoining  the  Regional Greenhouse Gas Initiative (RGGI)  as one of his first acts in office

In 2015, Gov. Christie backed New Jersey out of the RGGI, an initiative in solidarity of policy and efforts to limit the emission of Greenhouse gases. Paul Murphy has pledged to re-join the RGGI as one of his first acts in office. “Economic growth and environmental protection are not mutually exclusive,” says Murphy. “We can base a new and stronger middle class on innovation and clean energy, and ensure all communities take part.” We’re more confident than ever, of a brighter future for owners of Solar Panel Systems in New Jersey moving forward. If you have been debating about going solar for your home or business, Governor-elect Murphy just made the decision a lot easier and cheaper – if not an outright money-maker, without the risk of other investment options. Aquantum Solar is excited to have a Governor who understands the moral, environmental, economic opportunity of moving toward a clean energy economy in New Jersey.

The only question now is – do the rest of us?