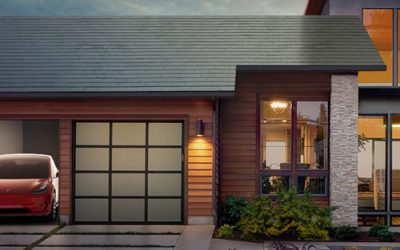 TESLA has been on everyone’s mind since they announced their uber-sleek solar roof tiles in California this summer, before rolling out to the rest of the country. The Tesla Solar Roof tiles are designed to replace traditional roofing tiles. They will featured embedded solar panels within a certain percentage of the tiles – resulting in a sleek, effortless solar roof. The tiles differ from most solar panel systems in today’s marketplace which are superimposed on existing roofs.

But while the Tesla Solar Roof tiles are innovative and aesthetically beautiful, are they worth the considerable price tag? The cost of installation of a Tesla Solar Roof is very high in comparison to both traditional roofing tiles, as well as traditional solar panel systems. For example, a story on Bloomberg calculates the cost of a Tesla system at about 30% above a traditional roof with a solar panel module. Additionally, Tesla has not revealed much data in terms of the system’s capacity to generate power, the exact dates of release, nor the reliability of their stress reports. Let’s look a little deeper at the Tesla Solar Roof.

Why Tesla?
Let’s face it – the Tesla Solar Roof is gorgeous. The tiles lend a finished, minimalist look to most homes, and the placement of the solar panels hidden within the tiles itself is superior to earlier offerings in this category. The tiles currently come in two finishes, textured and smooth – and Tesla plans to launch 2 additional styles in 2018.
Aesthetics aside, the Tesla Solar Roof is also the most premium offering in the solar roof category at the moment, and homeowners would enjoy a sense of prestige with this kind of finishing on their home. And as is the case with all solar panel systems, the Tesla Solar Roof is expected to generate savings to one’s electric bill. Though the exact efficiency of the system at the moment is not very clear, the savings by going solar are usually in the range of a 60-70% reduction in your electric bill.

Do the numbers make sense?
Conventional rooftop solar panel systems in New Jersey typically pay for themselves through utility savings and government incentives on solar in about 5-7 years. However, as the cost of the Tesla Solar Roof system is comparatively higher with no promise of additional efficiency or savings, the payback period for the entire rooftop is pegged at about 16-17 years.
All solar panel systems in the United States are entitled to a 30% federal solar tax credit on the entire cost of the system, adding to the financial draw of investing in a solar panel system. However, with the Tesla Solar Roof, the federal tax credit is limited to only the “solar” portion of the roof and not on the entire roof. In monetary terms, a Tesla Solar Roof costing $50,000 with 60% solar coverage would offer the same federal tax credit as a conventional rooftop solar system costing $30,000. This situation may change as Tesla is trying to lobby for a 30% tax credit on the entire roof system, but this has not become law as yet. 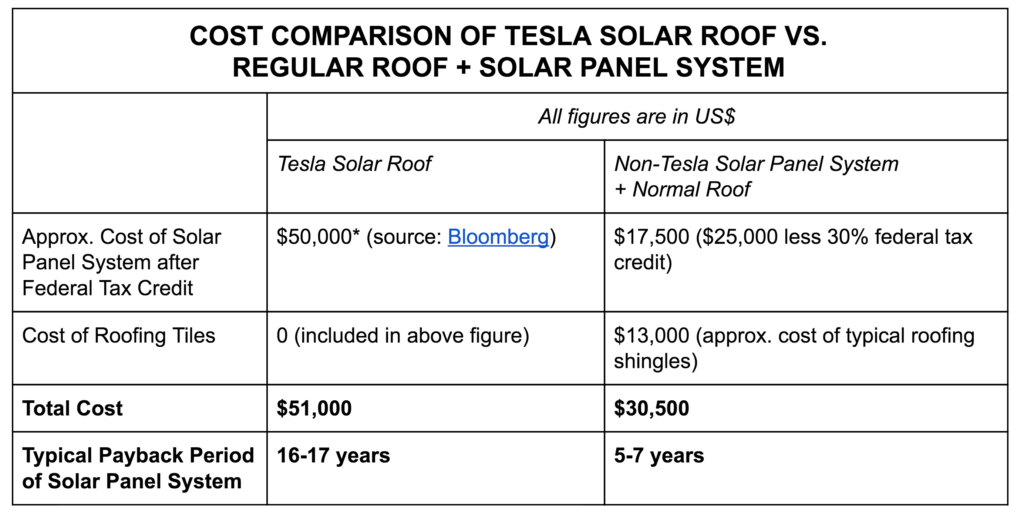 Furthermore, since the exact rollout dates for Tesla’s solar roof have not yet been disclosed for the rest of the country, experts are predicting delays in installations for homeowners across the board. This could mean a loss in savings over opting for a conventional solar panel system now, that could be installed without any delays at all.

Homes with Flat Roofs
Since Tesla roof tiles’ primary appeal is aesthetic, they are best suited for homes where the roofs are designed at an angle. Homes with flat roofs are best suited for regular solar panel systems as the tiles will not be visible to anyone.
Another interesting report on GreentechMedia indicates that Tesla Solar Roofs may not produce enough energy per square foot for homes with limited roof exposure and higher energy needs. For example, it’s estimated that a Tesla Solar Roof would produce about 6 watts per square foot, whereas a high-efficiency solar panel module could produce up to 19 watts per square foot. This is a helpful fact for homeowners with limited roof space who need high efficiency systems on their rooftops to meet their energy requirements.

In conclusion
Does the Tesla Solar Roof make sense for you? You need to ask yourself 3 questions :
• Does your home need a new roof? If your roof is between 0-12 years old, you probably don’t.
• Are you comfortable with a longer financial payback period, or a lower return on your investment (ROI)?
• Have you explored all the options for solar panels in the current marketplace?

Since Tesla and SolarCity officially merged last year, all of Tesla’s solar systems are set to be installed by SolarCity. Tesla users won’t enjoy the benefit of an open marketplace with many vendors, and will instead be reliant on SolarCity for all of their installation and service work. This could prove problematic for homeowners in the event of any troubles within the company.
In conclusion, while the Tesla Solar Roof is an aesthetically beautiful option, its pricing ensures it remains at the top-tier of solar panel systems. It’s also a new product in the market which hasn’t yet been tested, and going for it now bears a certain risk factor. Besides, the current market has some beautiful solar panel options as well. More on that in our upcoming blog posts.